Last year saw the release of the highly popular trivia game: HQ Trivia. In fact, it now attracts over 1 million players per game. The company behind that game has recently raised $15 million in new funding raising their value to $100MM. What a great success!

The Internet has flooded with questions: What is the secret behind that game? Why it’s so popular? How it was built? Everyone wants to know how to repeat the success!

I will try to uncover up some uncertainty, show the numbers behind the game and calculate the monthly infrastructure expenses for servers. 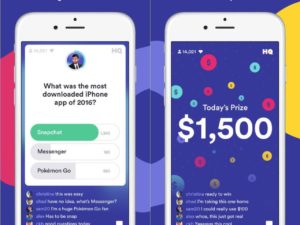 Let’s assume HQTrivia has next parameters:

I would divide estimation for 2 parts, one is everything related to video streaming, another one is for gaming and text chat.

What about video streaming?

Let’s use Red5Pro video streaming server as an example. Red5Pro server will allow us to stream video to 1,000,000 users. This is not trivial task and will require running great amount of servers in a cloud. Let’s calculate expenses for Amazon Cloud. Amazon web services calculator will be used.

We will need 571 Amazon C.5 large instances. Game video stream itself will run 15 minutes a day, but we need to prepare everything in beforehand so I assume servers will run 45 minutes a day. That is 23 hours in total, cost is $1120/month.

Next is licensing costs. Licensing from Red5Pro for 571 servers will cost $31,350/month.

And the biggest expense is traffic, we can find out that monthly video traffic will be 1,572 TB (Terabytes), yes it is a huge amount of data. The cost is $84,377/month. And when you book so many servers, Amazon will ask you to pay premium for support, which is additional $6,174/month.

I would suggest to create servers in Golang technology and roughly it will support 20K users per one Amazon AWS C5.4xlarge server. Meaning we need to run 50 servers, 23 hours in a month, the cost is $1,564/month

And we will have at least one separate server for database and one main server running 24/7, that will roughly add let’s say $500/month on top. 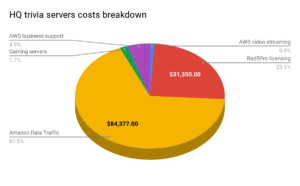 Obviously they are making enough profit that they can afford the data costs.

We give you the flexibility to host on your own servers. Rather than a hosted solution where they could add a surcharge on top of the data cost. What is more, with autoscaling, you don’t need to keep a large number of servers running. It is built to scale with you. Be sure to check posts on this.

Here in Trembit we are passionate about mass scale video streaming systems, so don’t hesitate to reach us out and share your ideas at: sz@trembit.com