As a rule, drone videos are recorded, edited, and only then published on some kind of streaming platform. However, this approach lacks relevance and the feeling of “here and now.” Especially if a blogger put this activity on the back burner and posted a video in mid-December, filmed in the height of summer. It’s not very fun to watch someone basking on the beach when it’s freezing cold outside.

So why not give your audience incredible views and adventures through live streaming?

Previously, this idea was not very attractive due to poor quality video transmission and interruption of the broadcast due to poor Internet connection (Wi-Fi or cellular) and reception in some regions. But technological advances do not stand still, and drone video streaming is no exception.

Let’s take a look at how drones are being used in today’s video streaming industry and what are the ways to broadcast video directly to a live video conference room.

Drones Rushed Buzzing into our Lives

The drone has already ceased to be something like a peculiar object from the future. Gone are the days when people raised their heads to look at a gadget with a camera inserted into it flying over their heads. They just got used to them. The agile aerial vehicles have become something familiar and, in some cases, even mandatory.

They can play different roles and be used not only in the framework of some large-scale events but also to perform routine work tasks.

Spectacular sporting events, such as off-road rallies or sailing regattas, have always been considered the most difficult to broadcast. Due to technical limitations, it was difficult, if not impossible, to capture breathtaking moments. In addition, the involvement of helicopters for filming from the air is not a cheap pleasure.

The advent of drones and the beginning of their use in the film and television industry was a step towards solving such problems.

In order to fully convey to the audience all the beauties of our planet, travel bloggers spare no expense in getting expensive equipment. This also applies to drones, without which it is already hard to imagine a full-fledged shooting.

One travel blogger sincerely apologized for not being able to use his drone for filming due to technical issues in one of the episodes. Yes, indeed, travel videos without bird’s-eye shots are no good! It’s no wonder why this episode got the fewest likes.

Drones will allow audiences to fly over the mind-blowing Norwegian fjords, chase long-necked giraffes on safari in Africa, and maybe even get close to an erupting volcano with an unpronounceable name somewhere in Iceland. Of course, the latter will most likely destroy your drone, but the footage is worth it, right? Especially if everything is happening in real time.

The use of drones is not limited to creating entertainment content. They are successfully used in such important and noble causes as saving lives and ensuring law enforcement and public safety.

The police may use UAVs to be able to patrol and monitor large areas, coordinate operational actions, analyze the situation, and search for violators and victims.

Unmanned aircraft are successfully used by firefighters and rescuers around the world to perform the following tasks:

Cartography is an area in which unmanned aircraft are used massively and everywhere. Previously, in order to clarify the location of objects on maps, aerial photography was carried out from manned aircraft. Today’s compact, maneuverable and easy-to-maintain drones not only take pictures of the area but also solve specific tasks for surveyors and workers in related fields:

The earliest experiments with drone couriers started in 2013. Amazon was one of the first to announce its drone delivery plans. At the time, this statement was met with a fair amount of criticism and skepticism. In December 2013, as part of a DHL research project, drugs weighing less than a kilogram were delivered using a prototype microdrone, “Parcelcopter”. And since then, drones have been delivering oversized goods, mail, medicines, and food to regions where it is impractical to send a courier.

The use of drones in logistics provides a bunch of benefits, including solving problems with less staff, the ability to work 24/7 and simplifying maintenance.

While in civilian life, operators use drones to film weddings and other pleasant events, the military is actively using the same unmanned aerial vehicles during the war. Why not? In war, all means are suitable.

In addition to professional military UAVs such as the Bayraktar, non-combat UAVs (drones) have also become indispensable assistants in warfare. They are effective for reconnaissance of enemy positions and adjusting artillery. Simply put, the coordinates obtained by gunners make it easier to hit the target. In addition, using drones reduces the risk of human life, which is a priority.

Launch your Drone and Go Live: 4 ways for streaming

This method is the easiest and most affordable way to stream from a drone to a platform. To do this, you need only a drone with remote control, a phone, an application that sometimes comes with the drone supplier, and a broadcast platform. By installing the application on your portable device (phone or tablet), you can use it to control the flight by attaching it to the remote controller. Using the phone is very convenient since, from the same device, you can choose the platform for broadcasting and go live.

It is worth noting that this streaming option is not suitable for all cases since along with the simplicity and mobility that this method is famous for, there are also some drawbacks. The thing is, most drone apps are limited to 720p for live streaming. In addition, you need a good Internet connection and good reception to ensure that your streaming is not interrupted.

Therefore, this is a great option for bloggers and just fans of filming their travels, but it is not suitable for professional broadcasts of important events.

Streaming with a Capture Card

This is an option for those who want to stream in Full HD. To do this, you need a remote control with an HDMI output, which you connect to your computer via a capture card. As with the other methods, you will need live streaming software and a good internet connection.

This option is ideal for streaming live events that require mixing and switching between multiple video and audio inputs (such as a concert).

Streaming from a Single Source to a Private Channel

This streaming option is used in search and rescue operations when the drone acts as the first responder, and the video from it is broadcast only on a specific private channel. The live streaming kit includes a remote control with HDMI output and a single-channel live encoder.

The easiest and most reliable option is to use Webcaster X2 for capturing and broadcasting, which allows you to stream Full HD 1080p video.

Fast-paced activities such as sporting events like rallies or sailing regattas will require multiple drones to be deployed in order to capture the full picture. To accomplish such a task, an advanced encoder such as the Pearl-2 will be required. This device is capable of receiving Full HD 1080p video from four drones at once, mixing, encoding it and immediately broadcasting it to one or even several platforms of your choice.

How technically to take a Drone video and send it to the video conferencing room? [DJI example]

The crucial part of adding video from drone to in-browser conference is the incompatibility of video codec and transmission protocol. The most widely used protocol to transmit video from drones is RTMP, which cannot be played in browsers since Flash Player was deprecated and removed. So here, we have to add a converter, which will receive RTMP from the drone and send WebRTC to the browser. Approaches here can vary, and the better option to solve this issue strongly depends on the video-room implementation stack. Let’s look at an example:

– Drone is able to send an RTMP stream

– We use the SFU video server for our conference functionality (open-source Janus WebRTC server).

In this case, the video server is able to consume RTP streams using the streaming plugin, so we can create a stream, send audio and video as separate streams to Janus and this stream can be shown in the conference room. To convert RTMP to two RTP streams, we can use FFmpeg, which is the most powerful and high-performant tool to convert videos. FFmpeg workers can be setted-up as serverless service in the cloud, which works on demand, or we can have multiple on-premise workers waiting for conversion tasks. 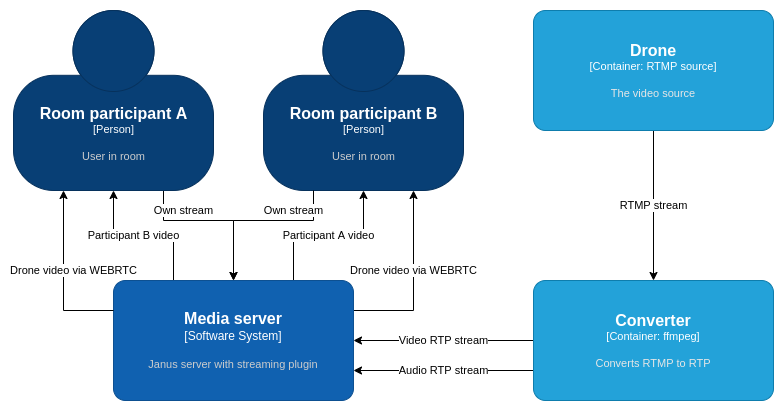 As can be seen on the FFmpeg command above, we are also transcoding audio because, from our experience, the input audio codec in most cases, is not supportable in the browser. Issues like that can be easily fixed using FFMPEG by adjusting the worker command.

Contacts us for solutions

If you see the possibilities of using live streaming from drones, our video streaming app development team will help you with the right software. The streaming platforms we develop are reliable, user-friendly and can be customized to suit your specific needs. From drone launch to high-quality video in a cozy virtual monitoring room, provide you with an excellent experience.